“I imagined that our love was like a weedy garden: poisonous plants hid among ravaged strawberries...” 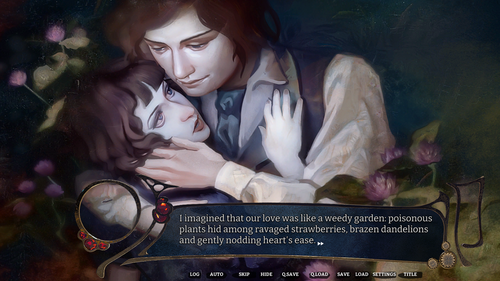 Here's a peek at that odd little relationship the MC and Markaius have. The story begins with their relationship ongoing, but they have problems. It really is a weedy garden. There's some old wounds and some glaring issues (some of them created in a previous game, Asher, although you needn't have played Asher to enjoy the Empress of Aeser). Playing Tetrine, you can address these problems...

(And romance another character with a fresh start... or no one. That's fine too. There's plenty of plot to take up Tetrine's attention).

Anyway, this is a preview of a static event illustration. Some sequences are animated, some aren't. I may be able to go back and add animations to some, but right now I'm trying to wrap up the demo as quickly as possible.

Decided on making the UI a bit more ornate.

The time period the World of Aeser is inspired by is from the late 1910s to the early 1920s. Art Deco hadn't yet reached its heyday, and I like this odd transitional period. Simpler than Victorian, softer than the harsher Art Deco.

As usual, more behind the scenes details on our Patreon.

When an Empress is immortal, she may cast her Shadow forever.