"The Sun Goes Out" is a very short story about survival and about what people need to survive - and thrive - most of all.

If you liked this story....

....Check out some of our others. Have you ever wanted to outsmart a demon on a rainy day? If so, try Tell a Demon, or the free prequel, Asher.

That was quite ominous and the fear was so palpable even though it was written in just a few words. Seeing MC trying to hold it together while Jay is just, grounded by the present and not caring about anything as though he has to remove himself from the situation to function is so sobering. And the little world building makes it more terrifying because it feels real, it feels real in the way that the rich, when banded together, can fully exploit over anyone when science has reached to a point, and that point can be bought with money. How people, ordinary people, have been affected so much you can't even imagine how those at the lowest tier are, how are they even surviving when those that have some resources barely are able to pull themselves together, are they even alive at that point?

Reading through MC's struggles with just the tomatos is heartbreaking because imagine what their struggles are towards actual important things, that small little thing just helps encapsulate how powerless people are, especially when the most vital thing is being controlled so heartlessly for a select people.

Thank you for taking the time to comment. You perfectly encapsulated everything that was on my mind when I wrote this.

This is such an interesting and ominous premise!! The story felt unsettlingly immediate and real, and your art is absolutely gorgeous. It was interesting to see these huge events through the eyes of an ordinary person, who doesn’t have all the facts – their focus on the essentials made it feel very grounded.

The feeling I came away with was that awful things may happen but sometimes you just have to focus on what you can do with what you have, even if it’s just cooking some tomatoes into a sauce, and trying to stay hopeful for the future.

Thank you for sharing, I look forward to checking out your other work. 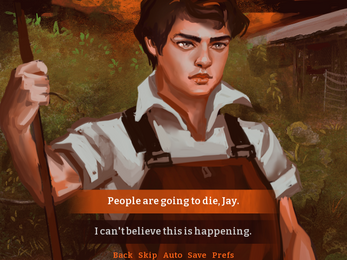